A first look at players the Dolphins might target this offseason

The Miami Dolphins offseason has begun and the time to make plans for 2014 has begun.  Many would say fire everybody, but I am closer to saying bring everybody back.

Randy Starks, Paul Soliai, Brent Grimes, Richie Incognito, Dustin Keller, Tyson Clabo, Chris Clemons, Bryant McKinnie and Nolan Carroll are the top unrestricted free agents and they are all NFL caliber starters at their positions, some of them Pro Bowlers.  Only Brent Grimes seems to qualify for a pay raise, so it should not be too costly to keep your best players. 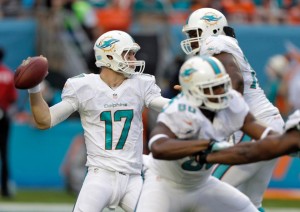 Other unrestricted free agents are in the fringe roster spot category Chris Owens, Austin Spitler, Marlon Moore and John Jerry, who actually is a starter for Miami’s beleaguered offensive line.  I have no problem with camp invites for all of those guys, along with the restricted free agents, RJ Stanford, Danny Watkins, Pat Devlin and Will Yeatman.

I am also very intrigued by the talent displayed by the exclusive rights free agents, Michael Thomas, Jonathan Freeny and Armon Binns.

There are many negative things that can be said about the Dolphins roster, but it is pretty stacked and there is cap room to play with.

The first step is not to overreact and discard discounted talent for the sake of change.  A great player can bounce back from injury or a down season as Brent Grimes just demonstrated.  Out of the top eight free agents below Brent Grimes, if only four have above average seasons they will have been worth the overall investment.

You build a family mentality and stay away from mercenaries looking to get paid.  Stick with your guys as long as possible and give them another training camp to prove they deserve to be starters or quality backups for you.  Unless you feel that they have proven on film that there is no bounce back season left in them.

Obviously, the offensive line was terrible this season, but I do not view former pro bowlers like McKinnie, Incognito or Clabo as below average starters in this league.  Mike Pouncey just made his first pro bowl the year, putting him in the same class as them.  (continued on page 2, CLICK HERE)