After busy Day 1, what’s next for Dolphins on Day 2?

As expected, the Miami Dolphins filled one of their major holes within the first few minutes of free agency. They signed LT Branden Albert to a 5 year deal worth approximately $47 million ($25 guaranteed).  Albert will immediately be penciled in as the Dolphins starting left tackle. 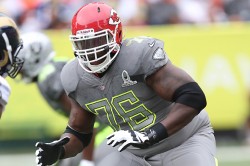 Albert’s signing comes just a day after the Dolphins added a new starting safety, Louis Delmas.  Two days, two new starters.  Oh yeah, and they traded Jonathan Martin for a conditional 7th round pick!  But the Dolphins aren’t done yet, not by a long shot.  The Dolphins have a number of holes to fill this offseason, not the least of which is to rebuild virtually their entire offensive line AND find 2 quality defensive tackles.

The Dolphins flew DT Earl Mitchell (Texans) down to South Florida on Tuesday night and some news outlets reported the deal was done (somewhere around 4 years, $16 million with $9 million guaranteed).  The Dolphins have not confirmed the signing so it seems that the two sides are still hammering out the final details. Mitchell isn’t expected to leave the Dolphins facility without a contract.

When signed, Mitchell will be the Dolphins starting defensive tackle, alongside Jared Odrick.  While I think Delmas and Albert are upgrades, I can’t say the same for Odrick + Mitchell vs. Starks + Soliai.  Soliai, by the way, signed with the Falcons for 5 years and $33 million with $14 million guaranteed.  So the Dolphins saved about $2.5 million per season on a younger player….time will tell if it was the right choice. (cont’d on page 2, CLICK HERE)