Are Tannehill’s recent struggles cause for concern?

The Miami Dolphins are now almost 2 weeks into training camp. That’s two weeks of hands-on practice for Ryan Tannehill in Bill Lazor’s new offense.  But, instead of hearing about improvement, we’re hearing about Tannehill throwing interceptions….3 each of the last 2 practices.  Should we be concerned? 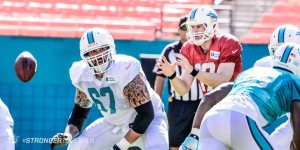 Remember, the last time Tannehill last played in a non-Mike Sherman offense was in high school….that was 2008.  He’s learning a brand new offense, behind a totally rebuilt offensive line, all while the coaches are asking him to make quicker decisions AND be more accurate with the football.  That’s asking a lot, which makes it tough to draw too many conclusions before seeing a regular season game.

Having written that, this is also a big year for Tannehill. He’s entering his 3rd year in the NFL and the Dolphins need him to take the ‘next step’ in his development.  Joe Philbin needs him to be good enough to guide the Dolphins into the playoffs….or Philbin may be calling his old buddy the Shermanator, looking for a new job.

“It’s a combination of a bunch of stuff,” the Dolphins starting quarterback said in explaning the issues. “Some throws we’re trying to make in practice to see if we want to move on with them during the season. We have other answers on the plays, but the coaching staff wants to look at some throws against different coverages and see if we can complete them. I think we’ve come to the conclusion we’re going to move on to another route.”

“Definitely, definitely,” he said. “I had a couple of plays today where I reacted just a half-second late. And as soon as it’s over, I knew. You don’t have to get coached up. You just know. And I can think back the first couple of practices where I had those plays and that happened, when those situations came up again, it didn’t happen. These new plays we’re going over, same thing, it won’t happen again.”– Miami Herald