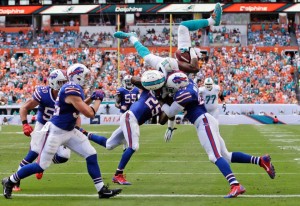 The Dolphins fell into a 14-0 hole after Ryan Tannehill threw a pick-6 on the Dolphins opening drive and then the Bills walked down the field and scored a follow up touchdown. The Dolphins would battle back though, limiting the halftime deficit to 17-14. It was 17-7, but Tannehill and the boys marched down the field and put the ball in the end zone when they needed it badly. After the half, the Dolphins defense stepped up and would limit the Bills to only 2 field goals. The offense, however shied away from the running game that had been working all day (4.8 yards per carry).

With the Dolphins leading 21-20 and 3:39 left int he game, the Dolphins had the ball at their own 48 yard line. The coaching staff called a running play that gained 2 yards, leaving the Dolphins with 2nd and 8 at the 50. Now, I’m no NFL coach. BUT, in my mind, the worst case scenario at this point in the game is to run some clock (with a running game that was working) and punt the ball. At WORST, the Bills get the ball back with 2 minutes to go at their own 20 and must rely on a practice squad QB to lead them into field goal range. Instead, Mike Sherman calls a pass play, Clabo gets mauled by Mario Williams, who sacks Tannehill and forces a fumble. Bills kick the game winning field goal and the Dolphins are left with a Hail Mary at the end of the game that falls with all of our dreams….to the ground. Dolphins lose 23-21, fall to 3-3. That sucked. (continued on page 2, CLICK HERE)