Breaking down the Dolphins playoff chances and possibilities

The Miami Dolphins took their first step towards making a late season push for a playoff berth in the AFC.  The Dolphins win on Sunday over the Jets was good for a number of reasons.  First, it was a win over the Jets, whom we all hate, which is always good.  Second, it was the Dolphins first win in the AFC East making them 1-2, and also gave them the head to head edge over the Jets.  Third, it was a win against an AFC team, making them 5-3 in such games.  That last point is important and we’ll get to why later on in this post. 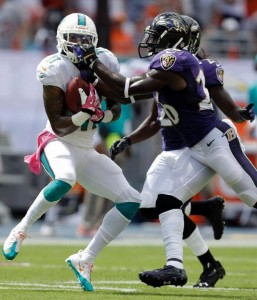 So now that all of the games in week 13 are completed, the Dolphins and Ravens are tied for the 6th and final playoff spot at 6-6.  The Ravens hold the tie breaker over the Dolphins, so the Dolphins will need to either finish a game better than the Ravens if just the 2 of them are in contention for the last spot OR they need a 3rd team (other than the Jets) to get involved in tie-breaking proceedings.

There are still 4 weeks left, so a lot can happen between now and playoff time.  BUT, it’s not too early to look at the remaining schedules for each of the contenders for the 6th playoff spot.  Most likely, a team with a 9-7 record will win the spot, but it is possible that the final playoff spot will go to a team that finishes 8-8.

Here’s a look at the remaining schedules for the teams that are 5-7 and 6-6, along with our thoughts on how the rest of the season might play out:

The Dolphins need to beat the Steelers, first and foremost.  That would get them to 7-6 and would essentially eliminate the Steelers from contention.  It would also get them to 6-3 in the AFC, making their chances to break a 3 way tie even better, down the line. If the Dolphins were to lose to the Steelers, they’d likely need to win out to make the playoffs.

The Ravens should beat the Vikings at home, but then things get tough.  They’ll play 3 straight games against division leaders, with 2 of those games coming on the road.  In my opinion, the Ravens will most likely finish at 8-8, but they could finish 1-3 in this stretch and finish at 7-9.  (continued on page 2, CLICK HERE)