Could CFL MVP Kory Sheets return to the Dolphins?

The Canadian Football League has already given the Miami Dolphins Cameron Wake and now, with Daniel Thomas out for the year, it could provide the team with another star player. 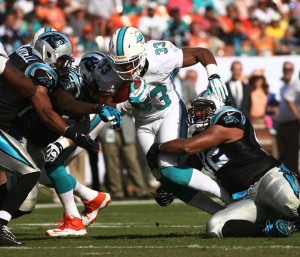 Two years ago the Miami Dolphins released running back Kory Sheets and in that time he has rushed for 2,833 yards, at 5.6 yards per carry,  added 783 receiving yards at 9.2 yards per catch, and scored 25 touchdowns.  Just yesterday, he won the Grey Cup thanks to a record breaking 197 yard and 2 touchdown performance that earned him the MVP trophy.

He is now a free agent and should be at the top of the Miami Dolphins wish list because he is riding a hot streak that one can only hope is contagious.

He was once the Miami Dolphins running back of the future and by a twist of fate that future could be now.

While I like Lamar Miller’s skill set, Kory is a 28 year old runner in the prime of his career and could well be the missing piece to this year’s offense.  (Editor’s note: We have been unable to confirm when Sheets would be able to sign with an NFL team, even though he is now a CFL free agent. We’ll keep you posted)

While many discredit his accomplishments because they happened in the CFL, I find it to be even more amazing due to the fact that in Canadian football third down is a punting down.

It would be wise to bring back Kory Sheets right now as we head into the must win in cold weather portion of the schedule.