Dolphins can shed the mediocre label with a win on Sunday

The Miami Dolphins are 6-6 and tied for the last playoff berth in the AFC.  With four weeks to go in the season, it is an excellent position to be in.  It is understandable that a lot of fans are afraid to get excited because they have been let down before, but there is legitimate Super Bowl hope in 2013. 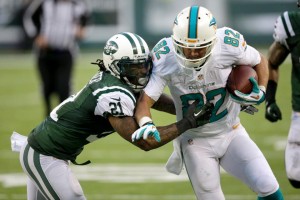 The team must continue to take it one game at a time, but do you have any idea what happens if they win in Pittsburgh?

Believe it or not, the Dolphins are mathematical favorites to get in, with a 41% shot which is much more optimistic than the Ravens 30%.

This is due to the remaining schedule and if Miami can come away from next weekend unscathed and at least keep up with the Ravens, who will host the Vikings, the odds will tilt much more in the Dolphins favor.

Both teams would have a home game against New England left, but Baltimore would still have to travel to Detroit and Cincinnati, while Miami travels to Buffalo and host the New York Jets, who may not have more than pride on the line.

This week is the tipping point of the season.  Believe.

For the latest news from PhinNation.com, be sure to bookmark our site in your browser!