Dolphins choke their way into the offseason with 20-7 loss

The Miami Dolphins entered Sunday’s must win game against the Jets with a chance to reach the postseason for the first time in 5 years and the second time in the last decade.  They had that chance despite playing an ugly, emotionless game against the Bills a week before.  As I said in my Pitiful Picks (and all week), I expected the Dolphins to get the help they needed from the Bengals or Chargers.  But my concern was if the Dolphins could take care of their own business, especially coming off of their bad loss to Chad Lewis and the Bills.  As it turned out, the Dolphins got the help they were looking for in Cincinnati and San Diego, but they couldn’t help themselves.   They choked. Again. 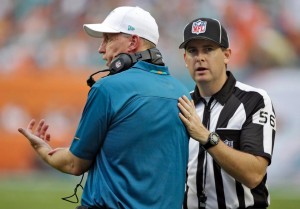 This game started off pretty well for the Dolphins.  After a scoreless first quarter, the Dolphins took an early 7-0 lead on a Tannehill pass to Mike Wallace.  Little did we know, that was all the scoring our high powered offense would provide. A few possessions later, the Jets scored a game tying touchdown when Sheldon Richardson, a defensive lineman, ran it in from the 1 yard line.  On the very next possession the Dolphins went 3 and out and gave the ball right back to the Jets.  The Jets and their turnover prone quarterback marched 80 yards on 13 plays in just 2-1/2 minutes and scored another touchdown.

By the way, does anyone else think that Geno Smith looks just like Juan Pierre (ex Marlin) running around in a football helmet?  If the Dolphins looked bad in the first half, they looked atrocious in the 2nd.  The defense held the Jets to just 6 points in the second half, but their offense was pathetic.  The Dolphins 2nd half possessions ended in the following:  turnover on downs, interception, punt, interception, interception.  That’s not playoff worthy.  In fact, that’s not even “Some Random Blog Bowl” worthy.

It’s really sad that with the playoffs on the line the Dolphins lost back to back games to Chad Lewis and Juan Pierre.  Both are rookie quarterbacks and both destroyed the Dolphins playoff chances.  The low point of this game had to be when the Jets ran the wildcat option pass and Bilal Powell hit Jeff Cumberland for a 30 yard game.  The Jets trolled us.  Hard.   (continued on page 2, CLICK HERE)