The Miami Dolphins will be without their best pass blocking running back in Daniel Thomas and it will force them to make adjustments as they prepare to face a heavy blitzing Jets team. 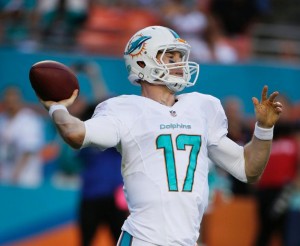 The team did not sign a running back, which is either a sign of apathy or a vote of confidence for the guys in the locker room.  I have to believe that it is the latter because Joe Philbin has some intriguing offensive weapons at his disposal that have yet to be truly unleashed.

The next man up in the backfield appears to be return man Marcus Thigpen, who is a diminutive 5’9″, 195 lbs.  Dolphins fans have seen him break off long kickoffs and punt returns over the past few years, but more relevantly, they saw him get 50 yards on one of his three receptions this season.  He may not be as bulky as Darren Sproles of the Saints, Danny Woodhead of the Chargers or Giovani Bernard of the Bengals, but should be used in a similar fashion as those smaller backs who Miami has had to game plan against.  They are all capable runners, but are most dangerous receiving passes out of the backfield.

Charles Clay should also get reps replacing Daniel Thomas as we all saw what a capable and powerful runner he is, with his multiple tackle breaking touchdown reception against the Chargers and his one yard touchdown plunge against New England.  Clay already plays a lot of fullback and tight end, and his 46 catches, 501 yards and 4 touchdowns are one of the lone bright spots in the 2013 offense.  He is the most complete and versatile player on the offense and needs to be heavily relied upon as a blocker, receiver and now as the team’s power back as well.

Lamar Miller stands to benefit most as this presents him a legitimate shot to become the featured back.  Unfortunately, the New York Jets have been holding opposing teams to a league low 2.9 yards per carry, so he will have to bring his “A” game.  15 carries and 5 pass targets should be the aim for himp, with anything more dependent on the how the game is playing out.

Out of all of the Jets game film that I watched, the Cincinnati Bengals attacked them in just the way that the Dolphins should.  The Bengals game plan never called for Andy Dalton to hold onto the football and go through his progressions.  The routes allowed him to hit his first or second read and get the ball out of his hand quickly consistently.  As a result, the Jets pass rush was ineffective as it could never get to the quarterback as it was a mathematical impossibility.  (continued on page 2, CLICK HERE)