This week the Miami Dolphins host the New England Patriots in another must win game.  While the possibility exists that Baltimore could lose two or three of their remaining games, Miami is already dependent on at least one loss from the defending Super Bowl champion in order to secure the 6th spot in the AFC playoffs.  Surprisingly, should Miami win this game, two more New England losses could allow the Dolphins to jump all the way into the second spot in the AFC, which is accompanied by a first round bye and at least one home play off game. 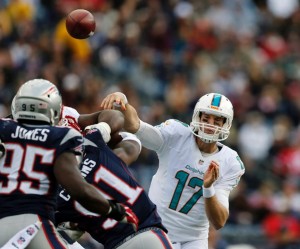 The point is that the stakes are high and the best thing the team can do is win out, which looks doable.

The Patriots have just lost star tight end Rob Gronkowski for the season, which drops them down a peg.  Miami has had an excellent pass defense and has given up only one touchdown to a receiver all season long if you throw out last week’s three touchdowns against Pittsburgh.  Those TDs  seemed to be very much aided by the snow and ice on the field which caused many defenders to be unsure in their running and tackling technique on both teams.

Many Dolphins fans question the drafting of Dion Jordan, but Tom Brady and the Patriots are the reason why he was the best selection the team could have made.  The man has proven to be an asset in special teams and on defense, both as a pass rusher, shadowing the quarterback and dropping into coverage against the top tight ends in the league.

I have made the argument all season long that his height and skill set could provide a much needed extra weapon to an offense that is having trouble in short yardage and goal to go situations and once more, I insist that the upside of the 6’6″ former college tight end is too high to waste away while he remains limited to a modest snap count.  His presence would either yield direct results or provide a legitimate decoy for defenses to account for.  (continued on page 2, CLICK HERE)