Dolphins get an ‘A’ so far in Free Agency

The Miami Dolphins are not done with free agency, but the first major wave has come and gone and the team’s core looks strong.

Branden Albert is finally a Miami Dolphin and the team has an elite left tackle again. 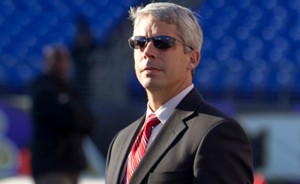 He is excellent in pass protection but only considered average in the running game.  His detractors say that he is only an above average left tackle, but he is coming off of a Pro Bowl season.

Even if Branden Albert was overpaid with his five year, $47 million dollar deal, the team has secured one of the most important positions in football for the next 3-5 years.

I had visions of using that money, and then some, plus a draft pick to secure Darrelle Revis, who is now a Patriot, but this was a big impact type of the move.

The Dolphins would have arguably made the playoffs last season had they traded for Albert, but they were able to keep the pick and get him as a free agent, which is a win.

His signing makes it easier for the offense to feature more deep balls to Mike Wallace as that play requires great pass protection.

I was also hoping the Miami Dolphins would pursue Jairus Byrd, but the team secured Louis Delmas on a one year, $3.5 million deal.

It is an excellent low risk, high reward proposition, similar to the Brent Grimes, Dustin Keller and Tyson Clabo signings of last season.  Let’s hope that he is more Grimey than Kellery or Claboey.

Earl Mitchell, at four years and $16 million, was a brilliant pickup at defensive tackle.

It reminds me of when the team signed up and coming defensive tackle Randy Starks, and the savings between his contract and the five year, $33 million deal that Paul Soliai signed with Atlanta allowed Miami to retain Randy Starks.

Randy Starks was the seventh best defensive tackle in football last season according to Pro Football Focus and the team was able to keep him on a two year, $12 million deal.  Brilliant and financially responsible.

The arrow is pointing up with the draft still more than two months away.

Building through the draft is an exception and not the rule, proven by the fact that the same teams are near the top of the order almost every year.

Well built teams get stronger in the draft, because they are not desperately plugging holes and pinning their hopes on rookies and the Miami Dolphins will be one of those teams in 2014.

The team no longer has left tackle, defensive tackle or safety as first round needs, so new General Manager Dennis Hickey has already made his presence felt.

The clouds are clearing, the off-season is getting sunnier by the day and the team’s fan base has plenty of reason to be confident about the future.