Dolphins have no excuses, just win in Buffalo

The Miami Dolphins have been playing like a different football team the last 3 weeks.  In their 3 straight wins they have shown an ability to close out games that was missing earlier this season.  More specifically, the Dolphins found ways to close out games against both the Steelers and the Patriots.  Yes, the endings of those games were eerily similar to losses the Dolphins faced earlier this season (i.e. the Panthers and Ravens games come to mind).  BUT, in the last 2 weeks, the Dolphins have held on for dear life…..and emerged with victories. 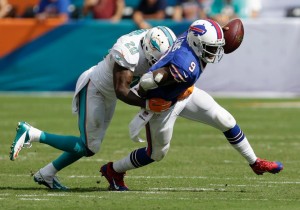 The Dolphins have also played very well against established quarterbacks in the NFL.  Think about it, the Dolphins have beaten Andrew Luck, Matt Ryan, Ben Roethlisberger, Andy Dalton, Phillip Rivers, and Tom Brady this season.  Unfortunately, the Dolphins lost games to Mike Glennon and something called a Thad Lewis.  Well we learned on Wednesday that the Dolphins will get another crack at Mr. Thad Lewis, when the Dolphins head to Buffalo on Sunday for a crucial game against the Bills.

You remember Lewis, he’s the guy who was on the practice squad earlier this season and dealt the Dolphins a brutal loss in mid-October.  What was most surprising is the fact that the Dolphins lost that game after having 2 weeks to prepare AND they were at home.  It didn’t help that Ryan Tannehill threw a pick-6 early in the game and the Dolphins fell into a 14-0 hole.  The Dolphins rebounded to take the lead but ultimately lost to the Bills 23-21.  I was personally at that game and I have to say that it was a huge disappointment.  But that was a different Dolphins team and quite frankly, a different Ryan Tannehill.

In that first Bills game a number of things went wrong, but the most glaring problem was that Ryan Tannehill turned the ball over 3 times.  He threw 2 interceptions, including the pick-6 and also lost a fumble late in the game.  Tannehill completed only 19 of 37 passes for a completion percentage of 51%.  I don’t have to tell you this, but that’s not good.  In his past 3 games, including 2 cold weather games, Tannehill has thrown for 8 TDs and  just 2 INTs while completing over 64% of his passes.  That’s good.  And if THAT Ryan Tannehill shows up on Sunday, it’s hard to see how the Dolphins can lose this game.   The Dolphins have the QB advantage in this game, without question.  No excuses.

Quite frankly, the Dolphins have everything to play for in this game and will once again be facing a practice squad QB.  There are no excuses.  Just win baby!  The Dolphins just need to win their last 2 games and they punch their ticket to the postseason, no doubt a pre season goal of theirs (and Dolfans everywhere).  Meanwhile, the Bills are 5-9 and are simply playing out the season and already looking towards next season.  No excuses.  (continued on page 2, CLICK HERE)