Dolphins have ‘Shermanated’ their offensive coordinator

“I would like to thank Mike for his contributions to the Miami Dolphins,” Philbin said. “Mike has been a mentor to me throughout my coaching career, dating back to 1979. He is a man of great integrity, dedicated to his family, his team, his players and his profession. On behalf of the entire Miami Dolphins organization I want to wish Mike and his family the very best in the future.”” 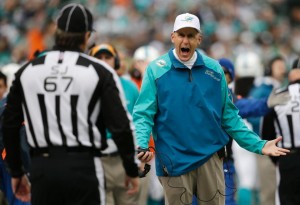 So Mike Sherman has been Shermanated, a term I’ve become quite fond of.  Sherman’s play calling was often criticized by fans and we even learned last week, by Joe Philbin.  Sherman served as the Dolphins offensive coordinator for 2 seasons and his units ranked 27th in the NFL both seasons.  Sherman has also been coaching Ryan Tannehill for the last 6 years (4 at Texas A&M, 2 in Miami).  Maybe it’s time for our young QB to have a new voice.  Who might that voice be?  Glad you asked because there is already a ‘favorite’ according to Adam Beasley of the Miami Herald:

One knowledgeable source went so far as to say Ben McAdoo is the favorite to replace Sherman. “Good coach, players like him.”