The Miami Dolphins entered Sunday’s game, facing a crossroad.  Would they wilt under the pressure of a huge game against the hated Patriots.  Or would they rise to the challenge and make their presence known in the AFC playoff race?  The story of this game followed the same script as many games we’ve witnessed this season.  The Dolphins took a lead in the 4th quarter then watched the opponent march down the field for the go-ahead score. 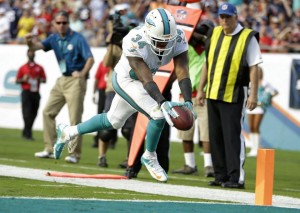 The Dolphins took a 17-13 lead with a touchdown early in the 4th quarter.  But, of course, Tom Brady had an answer.  Brady marched the Patriots down the field and led them to the go-ahead touchdown, taking a 20-17 lead.  When the Dolphins got the ball back with just over 4 minutes left in the game, you had to think that the would play for a field goal to force overtime.  But Ryan Tannehill and the offense had bigger plans.

The Dolphins had back to back bad plays and found themselves at their own 34 yard line, facing a 3rd and 17.  They still had all of their timeouts left, but the clock was under 3 minutes.  A 12 yard pass to Brian Hartline brought up 4th and 5.

At that point, Phil Simms implored Joe Philbin to punt and use his timeouts to hopefully get the ball back.  I love that Philbin went for it from the Dolphins 45 yard line. Giving the ball back to Tom Brady is NEVER  a good idea.  If the Dolphins punted and the Patriots picked up 2 first downs, the Dolphins would never see the ball again.  Thankfully, Ryan Tannehill got the ball to Charles Clay and he made a cut and picked up the first down by 1/2 a yard.  I hated the play call by Sherman, but what else is new!  The play worked despite Sherman’s bad call.

The Dolphins drove the field and Tannehill connected with Marcus Thigpen for the go-ahead touchdown, making it 24-20.  But Tom Brady got the ball back with 1:15.  He promptly drove the Patriots down the field and Dolfans everywhere just waited for the inevitable to happen.  We’ve seen this movie before.  It’s one of our most watched movies, right?  The Dolphins would find a way to break our hearts.  NOT THIS TIME!!!  The Dolphins held the Patriots in the final minute and sealed the win when Michael Thomas (WHO?) picked off Tom Brady in the end zone with 2 seconds left on the clock.  The Dolphins flipped the script and held on for a HUGE, possibly playoff saving victory, 24-20.  (continued on page 2, CLICK HERE)