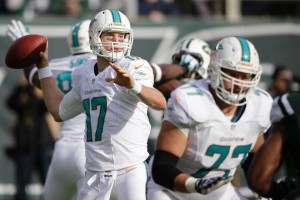 They ran the ball 15 times to the left, 12 times to the right, and 7 times up the middle. This shows balance between the left and right side, but seems that they don’t like to run it up the middle a whole lot.

Here is the breakdown by personnel group:

First Half: The Dolphins didn’t use this group at all in the first half.

Second Half: They used it five times in the second half and all of them were running plays. There were three runs to the left side, one up the middle, and one to the right side. This formation was used when the Dolphins were trying to run out the clock at the end of the game.

Analysis: Not much to see from this game because the Dolphins were up by 17 and were simply trying to milk the clock. (continued on page 2, CLICK HERE)