Dolphins show no heart in embarrassing loss to winless Bucs

Dolphins fans, we’ve had our share of low points over the last decade, haven’t we?  And yet, every time we reach a new low, the Miami Dolphins somehow find a way to fall even further.  I’m hesitant to say that we’ve officially reached rock bottom.  Because, who knows?  If you are a Dolphins fan that has full faith that the team will turn things around, you might not want to continue reading much more. 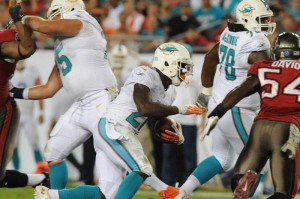 The Dolphins had a chaotic week following the Jonathan Martin/Richie Incognito situation.  Many, like me, thought that they would be galvanized and come out against the 0-8 Buccaneers and play angry.  Well, they didn’t.  In fact, they fell behind 15-0 in the first half.   Ryan Tannehill did manage to lead the Dolphins down the field before the half, completing 8 of 8 and capping it off with a touchdown pass to Rishard Matthews to cut the deficit to 15-7.

After the half, the Dolphins seemed like a different team.  While they came out EXTREMELY flat in the first half, they actually moved the ball and played well in the 3rd quarter, building a 16-15 lead.  After a Jimmy Wilson interception, the Dolphins had 1st and goal from the Bucs 7 yard line and had an opportunity to build an 8 point lead.  But then….the Sherminator happened.

The Dolphins lined up in the shotgun for 3 straight plays, which resulted in a -2 yard run, an incomplete pass, and a completed pass for -3 yards.  They settled for a field goal and although they took a 19-15 lead, they failed to step on an opponents throat and put the final nail in the coffin.  The Bucs answered on the very next drive, going 80 yards and scoring the eventual game-winning touchdown.  The fourth quarter is when the Dolphins finally quit.  The defense couldn’t stop the Bucs and the offense moved the ball a TOTAL of 23 yards on 2 series.  The worst was the final series when the offensive line did their impression of a matador, simply waving at the Bucs defenders as they bum rushed Ryan Tannehill.  We have reached a new low Dolfans.  (continued on page 2, CLICK HERE)