Dolphins smart moves in Free Agency will pay off in 2014

The Miami Dolphins were busy in free agency as they looked to upgrade many positions, while having tough decisions on a lot of their own top performers.

I grade the biggest decisions the front office made in free agency taking into account their price, their 2013 Pro Football Focus rating, their fit on the 2014 Dolphins and even their effect on the 2014 draft. 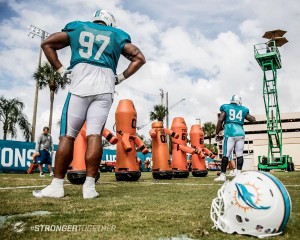 At cornerback, the Miami Dolphins retained the number one ranked free agent prior to Darrelle Revis’ release (+16.4) in the 31 year old Brent Grimes and rolled the dice on the bottom to last rated (-19.7) Cortland Finnegan, 30.

Grade: A – The team allowed three above average corners in (+5.0) Dimitri Patterson, (+2.2) Chris Owens and (+0.4) Nolan Carroll to walk, trusting that Cortland Finnegan’s will find his Pro Bowl form and that the young corners on the roster are ready to step up.  I am a believer.  I see a lot of talent and confidence in this group.

At safety, Miami allowed the fourth ranked (+4.1) Chris Clemons and replaced him with the fifth best (+2.0) in Louis Delmas.

Grade: B – Both have impressive coverage grades, but Delmas holds a league-low completion percentage of 43.8% on passes thrown into his coverage area.  I imagine receivers hear the footsteps when Delmas is near.  Clemons missed 14 tackles in 2013, while Delmas has had a tendency of giving up bad angles on plays.  While neither is a Pro Bowler yet, Delmas has been named an alternate twice and seems to have a star quality about him.

At defensive tackle, Miami retained the top guy on the list (+28.8) in Randy Starks while allowing the 7th man (+11.1) in Paul Soliai to walk.

Grade: A – Starks’ ridiculously high PFF rating is higher than Brent Grimes’ and Paul Soliai’s combined.  The team not only kept the better player, but at a bargain price of 2 years and $12 million.  The team softened the blow of losing the 30 year old Soliai by bringing in the highly regarded 26 year old (-1.9) Earl Mitchell, who was impressive as an undersized nose tackle. (continued on page 2, CLICK HERE)