Alright, so Jules and Cyrus have laid out their predictions for the 2014 NFL season, so I guess it’s my turn.  Jules thinks the Dolphins are winning the Super Bowl and Cyrus thinks they can reach the AFC Title Game.  I wish I were as confident, but I will hope that they’re right! 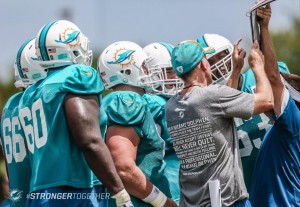 Alright, here goes, these are my playoff teams for the 2014 NFL Season:

So there you have it, I have the Seattle Seahawks repeating as Super Bowl Champions.  It won’t be easy because the NFC is pretty stacked.  BUT, I think the problems the 49ers are facing on defense will be too much for them to contend or even make the playoffs. This could lead to Jim Harbaugh leaving, which could lead him to….oh forget about it.

I think the Dolphins will squeak their way into the playoffs and could potentially win a game, depending on the matchup.  If they miss out on the postseason, we could be in for yet another offseason of big changes in Miami.  Irregardless, today is a great day because the NFL is BACK! I know this isn’t the song anymore, but the title is appropriate:  ARE YOU READY FOR SOME FOOTBALL????