Ja’Wuan James could be special for Dolphins

I must admit that selecting a right tackle at number 19 was one of my least favorite ideas, but the Miami Dolphins reached for one that has Pro Bowl potential at two spots.

That is the value I see in the James pick. 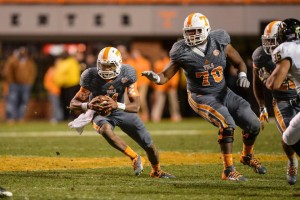 As a rookie he projects as a starter and I expect him to be better than both Tyson Clabo and Jon Martin were in the past two seasons.

However, what excites me about the pick is that he has all of the ability to become great at the position and possibly become just as good on the left side by the time Branden Albert retires.

I have stated numerous times that the draft is about finding stars, not starters, and Ja’Wuan looks elite to me.

Finding a starting right tackle in free agency would have been expensive, so it makes financial sense.

I expect him to make Ryan Tannehill’s job easier because he is strong in both run and pass protection, amassing many pancake blocks as well as key blocks on his team’s touchdowns in the air and on the ground.

In all honesty, I would have waited until the second round or traded down, but fully support the team’s decision because there is no guarantee he would have been there later.

If a team likes a player that much, they should not gamble on his availability later.

The tackle from Tennesse started 49 games in the SEC, so he should definitely be ready by game 1 to help this offense grow into an above average unit this year.

He gets the team closer to its immediate playoff goal as well as the long term Super Bowl dream.

Phins Forum: Like the pick? Hate the pick? Talk about it in our brand new PHINS FORUM!!!