The Miami Dolphins fired both their offensive coordinator and general manager earlier this week.  Since then, there have been a lot of people guessing as to who the Dolphins would bring in to fill both of those roles.  It’s often difficult to figure out exactly what is the truth and what is speculation.  So exactly who do the Dolphins have in mind for both of these positions? 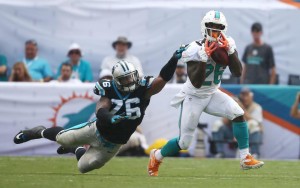 Actually, before we get into who the candidates are, let’s first think about what their responsibilities will be.  The Offensive Coordinator is a much simpler answer.  He’ll likely run the offense, with some influence from Joe Philbin, a former offensive coordinator himself.  I would guess the offense would be similar to the one that the Dolphins ran last year.  The new GM is a different story.  Will he report to Joe Philbin and Dawn Aponte?  Or will he have the power to fire one (or both) of them and report directly to Stephen Ross?  We simply don’t know the answer to that question, which makes determining which candidate is most likely, all the more difficult.

Thanks to the Miami Herald, we know that Bill Lazor and Ben McAdoo both interviewed for the offensive coordinator position on Wednesday.  Lazor is currently the Eagles QB Coach and is credited for helping Nick Foles post a QB rating of 119 this season.  Chip Kelly almost certainly had some influence there too, but it is Lazor that worked most closely with Foles.  Lazor is an interesting candidate because he could bring some wrinkles of the Chip Kelly offense to Miami.  McAdoo is the QB coach in Green Bay….so there are obviously some ties to Joe Philbin there.  McAdoo is also being considered for the head coaching position in Cleveland.  Oh yeah, and Aaron Rodgers said McAdoo can use his name as a reference, if needed….for whatever that is worth.

ESPN is reporting that Kyle Shanahan and Gary Kubiak are also on the Dolphins radar.  Shanahan has worked with his Dad most of his NFL career, most recently as the offensive coordinator with the Redskins.  Kubiak, as you know, was most recently the head coach of the Houston Texans.  It is unclear if either (or both) would be interested in the Dolphins open offensive coordinator position.  The positives with these two candidates are that they both have experience as coordinators at the NFL level.  (continued on page 2, CLICK HERE)