Lifeless Dolphins should be embarrassed after 19-0 loss to Bills

We all saw this coming, didn’t we Dolphins fans?  I know I did and you can check my Twitter timeline if you don’t believe me.  I hoped this Dolphins team was different.  I hoped that this Dolphins team would avoid a big let down after a big win.  But this Dolphins team looked just like every other Dolphins team we’ve watched for the last 10 years (except for 2008).   The Dolphins, riding a 3 game winning streak and coming off of a huge win over the Patriots, with their playoff lives on the line, came out lifeless against the Bills on Sunday.  In fact, if they hadn’t come out to the stadium at all, they would’ve scored the exact same number of points. 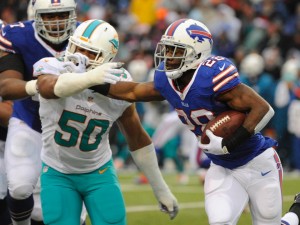 To call this loss a disappointment is a disservice to previous disappointing losses.  The Dolphins, as they usually do, got all of our hopes up, controlled their playoff lives for 1 week…..and then proceed to take a crap on our hopes and dreams.  Happy Holidays folks!  The Dolphins offensive line, which has looked good for the last few weeks, blocked as well as a roll of toilet paper would block a scud missile.  The Dolphins running game?  They were only going up against the 23rd ranked defense in the league.  They totaled 14 yards on 12 carries.   I’ve run further trying to elude a bumble bee.

Ryan Tannehill was battered and bruised, getting sacked 7 times, bringing his total to 58 on the season.  He was actually knocked out of the game at one point with a knee injury (he says he’ll be fine).  But Tannehill’s departure allowed for Matt Moore to come in and show his heroics.  He threw a 50 yard bomb to Hartline, which had fans all like “see, he should be playing QB and….”  And before they could finish their sentence, Moore threw an interception.  It was a microcosm of the Dolphins season if you think about it.  So happy…then so sad.  Moore would eventually throw another interception later, just in case you weren’t convinced.

This was ugly folks and I don’t have the heart to go through each terrible scoring drive to give you the highlights.  My doctor says that reliving these types of events are not good for me.  That…and they are only giving me 20 minutes with access to the computer at this mental facility that I checked into last night.   I’m kidding guys, I haven’t checked in…..yet!  All kidding aside, the Dolphins showed on Sunday why there must be major changes this offseason.  Yes, because of how a few games broke, they are still very much alive in the playoff race.  But should they be?