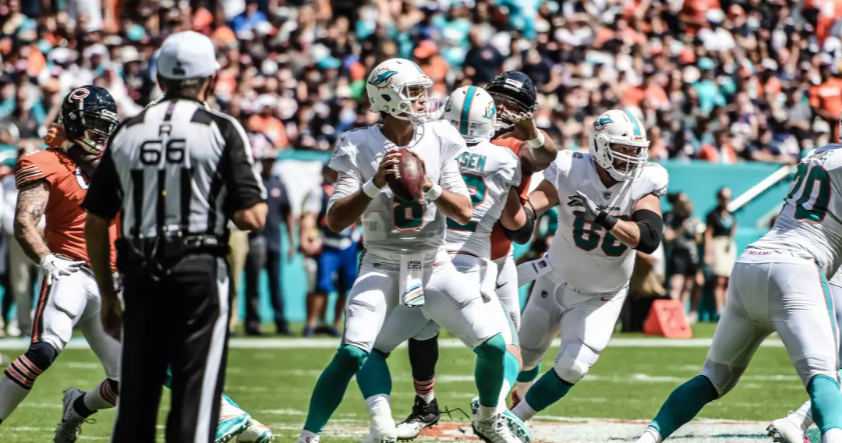 The Miami Dolphins 2018 season is not for the faint of heart.  All they did Sunday was ask their backup quarterback, Brock Osweiler, to beat the NFL’s top defense with the  All-World linebacker, Khalil Mack.  The Dolphins managed to pull off the upset (they were 7 point underdogs at kickoff) by sticking together in all 3 phases of the game.  The Dolphins defense shutout the Bears in the first half and took a 7-0 lead to halftime.  The offense sputtered and even turned the ball over at inopportune times, but made some big plays when they needed them.  Special teams did a good job in coverage, gave the Dolphins an edge in the field position battle….and were responsible for the game-winning field goal at the end of overtime.

This team has won some crazy games this season and seem to rise to the occasion more often than not, when facing adversity.  In the overtime period, we experienced all of the emotions of being a Dolphins fan.  They got the ball and drove down the field before Kenyan Drake fumbled at the Bears 1 yard line, just before crossing the goal line for the would-be game-winner.  Then, as expected, the Bears drove down the field against an exhausted Dolphins defense, setting up the ending we all dreaded: Cody Parkey (ex-Dolphin) kicking the game winner to tear all of our hearts out of our chests.  But he missed. He missed!  The Dolphins gave the ball to Kenyan Drake, showing their commitment to him, and he helped move the Dolphins down into field goal range.  Jason Sanders, the rookie kicker the Dolphins decided to keep instead of Parkey, drilled the game-winner as time expired in overtime.  The Dolphins won and moved to 4-2, holding on to a tie for first in the AFC East.

Here are our quick thoughts:

So the Dolphins got off the mat and sit at 4-2.  They might be without Ryan Tannehill for the game Sunday against the 2-3 Lions.  BUT, if they can find a way to win, they’ll move to 5-2 with a quick road trip on Thursday to Houston to face the 3-3 Texans, before returning home to host the 3-3 Jets. None of these games will be easy, especially if Tannehill misses 1 or more games.  However, with 2 of these next 3 at home, the Dolphins could make some serious progress in their playoff push if they could end up at 6-3 or better by the time November 5th gets here.