O.J. Brigance carved out a successful NFL career that began as a Miami Dolphin from 1996 until 1999. I remember him well although I apparently never knew how to properly say his name, much like Patrick Surtain.

I also did not know that he was a part of the Baltimore Stallions 1995 Grey Cup winning team and then joined the Ravens for their Super Bowl season in 2000. 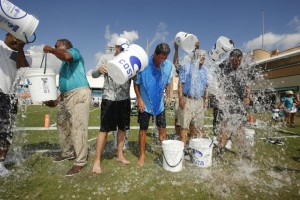 He helped bring a Canadian Football League and National Football League title in his two seasons in Baltimore, with the Stallions success helping set the stage for the NFL return to a city that lost the Colts to Indianapolis and the All-time winningest coach in NFL history, Don Shula, to the Miami Dolphins.

A linebacker and special teams standout throughout his career, Brigance was diagnosed with ALS in May of 2007 and has still managed to work for the Baltimore Ravens and lead his foundation, the Brigance Brigade. Http://www.brigancebrigade.org

His foundation is worth supporting as it is aimed at helping families caring for a loved one suffering from the cruel and terminal disease.

I took the challenge on behalf of PhinNation, winners of 2013’s team awards for most informative and best blog layout.

I challenged my other team, the cast and crew of My Fair Dude, a movie I am proud to be producing for.

The ice bucket challenge has made an excellent impact on the world community as a whole, with the world of entertainment and sport leading the charge.

It is a pleasant reminder that it has never been easier to spread awareness or raise money for a good cause.

My challenge to my readers is to spread awareness and raise money for the arts.

Fair Dude is an excellent candidate for some retweets, shares and donations.  Http://www.Facebook.com/myfairdude

Ready for the season. Ready to make a difference. That is what pouring a bucket over my head represented to me. I hope it creates a similar type of focus and inspiration for all who are touched by the movement.

Thank you Miami Dolphins for bringing me in!