PhinNation Predictions Part 2: Are the Dolphins a playoff team??

Recent history makes me a little bit afraid of projecting a 10+ win season, but the team is the strongest it has been in years and I do not think it is logical to expect mediocrity just because they have been in previous years.  Although that is a feeling I have a hard time shaking myself. 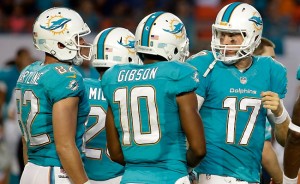 In spite of mediocre results Miami has played exceptionally well against, and beaten, some of the league’s elite teams over the past couple of seasons and I think that the key to turning the corner will be to deliver a 5-1 divisional record.  This is how I visualize their leap into the league’s elite.

Sweeps over the Bills and Jets are a must.  They could not accomplish this without Bill Lazor’s offense, in fact they put up a pitiful 1-3 record against these squads.

That three game swing would have given Miami an 11 win season in 2013.

This is not wishful thinking, as the team now has an offensive system that is very much capable of producing the 25 points per game that head coach Joe Philbin is aiming for.  They showed off their passing game in the first drive of the pre-season and then showed off running back Knowshon Moreno in the third pre-season game as he exploded for 62 yards on 10 carries.

The 1-2 punch of Knowshon Moreno and Lamar Miller out of the backfield will cause problems for defenses in this new offense in the running game and passing game.  The receivers are also quite possibly the best group that I have seen since the Marino days with Jarvis Landry a candidate for rookie of the year with his contributions on offense as well as a kick returner.

I envision a strong early season start that will receive a boost with the returns of Mike Pouncey, Dion Jordan and Reshad Jones at a time when most teams are losing depth.

Speaking of depth, there is solid depth at almost every position and the team has managed their cap well enough to make additions via trade should there be an opportunity to add a missing piece or two for a potential championship run.

The pressure is on with a fanbase that will not settle for mediocre anymore.

I expect the team to step up and be very focused from the first game and never lose the intensity.  Their “stronger together” mantra just might do wonders for them, just as “15 strong” did for the 2006 world champion Miami Heat.