The Miami Dolphins are about to kickoff year 3 of their most recent re-build.  Ryan Tannehill enters year 3 in the NFL…..Joe Philbin enters year 3 as the Dolphins Head Coach…..and both need to come up big this year.  Philbin likely needs to guide his team to the playoffs in order to stay in Miami beyond this season.  The team brought in a new offensive coordinator, who’s offense will finally be unveiled on Sunday.  The defense made a few tweaks, but remains a question mark.  Will the offseason changes by new GM, Dennis Hickey be enough? 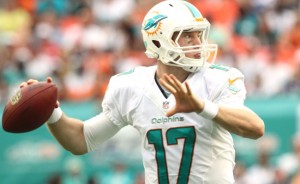 You’ve probably already read through Cyrus and Jules predictions for the season.  Spoiler Alert: I’m not as optimistic as they are. Cyrus had the Dolphins making it to the Conference Championship game and Jules had the team winning the Super Bowl.  I’m not going to give away my prediction just yet, but I will say that I’m cautiously optimistic.  Here’s how I see the season playing out:

Lazor unveils his new, high-speed offense.  Will the Dolphins be able to pass the ball effectively against a very good Patriots secondary?  Will they be able to stop the run?  Will the South Florida heat make the Patriots wilt?  I’d love for the answer to all of those questions to be yes.  One matchup that scares me to death is Vince Wilfork against Samson Satele.  Wilfork has stolen Satele’s lunch money in the past and I actually fear for Satele’s health after this game (and Tannehill’s).  Despite all of that, I think the Dolphins find a way to excite the fanbase, pulling off the upset of week 1!  Prediction: Dolphins 27 Patriots 24 (1-0)

Yes, I just predicted that the Dolphins would upset the Patriots in week 1 (still can’t believe I typed that).  In typical Dolphins fashion, I see them going up to Buffalo, after a big win….and losing.  Prediction:  Bills 20 Dolphins 16 (1-1)

Bounce back effort?  Bounce back effort.  The Chiefs made the playoffs last season and they just inked Alex Smith to a big contract.  I don’t trust their defense enough though. I don’t see them making it back to the playoffs this season, in what I expect to be a down year from the Chiefs.  They take a step back and the Dolphins find a way to pull this one out.  Prediction:  Dolphins 24 Chiefs 17 (2-1)

Now THIS is an away game. The Raiders are going to be improved this season, even though they’re starting a rookie QB.  I think the Dolphins defense steps up in this game and carries the offense to a victory.  Prediction: Dolphins 17 Raiders 10 (3-1)

This is just a tough matchup for the Dolphins.  The Packers are dealing with injuries now, but by the time this game rolls around, they’ll be healthy and probably looking to make up for a slow start.  Aaron Rodgers lights up the scoreboard and the Dolphisn will fail to keep pace.  Prediction: Packers 34 Dolphins 31 (3-2)

The NFC North is a tough division to face this year, with the only ‘weak’ team appearing to be the Vikings.  This game is a tough one to call because you never know which Jay Cutler will show up for a game.  On paper, this looks like a pretty even matchup, but I’m afraid Matt Forte will have his way with the questionable Dolphins rush defense. Prediction: Bears 23 Dolphins 20 (3-3)

Everyone is writing off the Jags this year and putting them down as a win for their team…..Maybe it’s those horrid 2-tone helmets?  They aren’t going 0-16, in fact I think they’ll end up winning 5 or so games this year. Having written all of that, the Dolphins can’t lose to the Jags. They can’t.  Prediction: Dolphins 27 Jaguars 13 (4-3)