Pitiful Picks: Can the Dolphins get off to a good start in 2015?

After 8+ months of waiting, it’s finally time for the Miami Dolphins to play in a REAL football game.  With the start of the 2015 season, it’s time for us to begin our weekly game of prognostication.  These picks are called pitiful for a reason. However, last year we weren’t too shabby, finishing 12 games over .500.  Hopefully this year brings about more Dolphins wins…..and less-pitiful picks from the PhinNation staff! 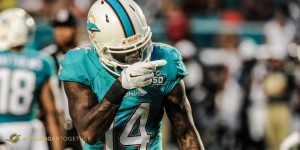 The Dallas Cowboys are coming off of a good 2014 season and look primed to fight with the Eagles for the NFC East title this year.  Yes, they lost Demarco Murray, but that offensive line is so good, I’m pretty sure Miami Jules could run for 1,000 yards this season!  The Giants, meanwhile, have a ton of injuries.  Their offensive line has question marks and their defense looks extremely suspect.  Yes, they have a great quarterback and a good receiving corps, but I think they’re in for a long season.  It starts with a rough game in Dallas against a quality Cowboys team.  Prediction: Cowboys 27 – Giants 17

The Vikings improved as 2014 went on and I think they could potentially finish 2nd in the NFC North this year.  The 49ers on the other hand, are a complete mess. They’ve had players suspended, injured, retire, etc. and are nothing like the team that Jim Harbaugh had contending with the Seahawks a few years ago.  I don’t think Colin Kapernick has enough weapons on offense and I think their defense is a huge liability.  The Vikings arrive with a motivated Adrian Peterson and Teddy Bridgewater, who looks like the real deal. Prediction:  Vikings 24 – 49ers 13

Some people think the Falcons will win the NFC South this year.  While I think that may be true, I don’t like this matchup for them against the Eagles.  The Eagles quick strike, fast-paced offense will give the Falcons trouble.  The combination of north/south running from Demarco Murray and accurate quick hitting passes from Sam Bradford, will keep the pass rush away and the ball moving down the field.  I don’t love the Eagles defense, I need to see how improved it is once the games start.  Sam Bradford is a good QB, the question over the long term is whether or not he can stay healthy.  The long term doesn’t matter in this week’s game because he’ll be starting. So I’ll take the Eagles -3.  Prediction:  Eagles 36 – Falcons 30

A lot of people are picking the Dolphins this week in their survivor pools. That scares the crap out of me!  I think of myself as a realistic Dolphins fan.  I usually tend to be more pessimistic than optimistic (this team has done this to me!).  However, I think they match up well against the Redskins.  I think the offense will do it’s job and score plenty of points.  But it’s on defense where I think we could see a dominating performance.  Kirk Cousins doesn’t exactly scare me and neither does the rest of the Redskins offense.  I’m confident that Mr. Suh and Mr. Wake will be featured in Captain Kirk’s nightmares all next week, after Sunday’s game.

The Dolphins now they need to get off to a good start because the schedule gets harder as the season moves along. Yes, they have some road games early, but on paper, those are winnable games.  Making a statement this weekend against what looks to be a Redskins team in disarray, would be a nice start.  Prediction:  Dolphins 27 – Redskins 13