Reports: McKinnie to start at left tackle for Dolphins versus Patriots

It seems as though the Miami Dolphins are finally ready to make a change to their shaky offensive line.  Earlier this week, the Dolphins traded for Bryant McKinnie and on Saturday news started to break that McKinnie will in fact start this week against the Patriots.  Adam Beasley of the Miami Herald tweeted the follow out, just moments ago:

I'm told that Bryant McKinnie is expected to start at left tackle for the Dolphins Sunday against the Patriots. Traded to the team Monday.

This means that 2nd year offensive tackle, Jonathan Martin will be move to right tackle and Tyson ‘The Turnstile” Clabo will be sent to the bench. 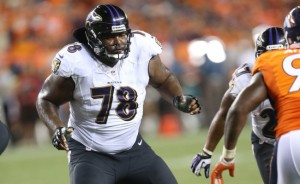 After the Dolphins made the trade with the Ravens, we expected this move to happen.  It is, however, surprising that the move happened this quickly.  After all, McKinnie did not practice with the Dolphins until mid-week, so it is unclear how much of the offense he knows.  All we can do at this point as fans, is pray….a lot.  But if you think about it; How much worse can the combination of McKinnie and Martin be than the combination of Martin and Clabo?  We’ll see on Sunday.

The short week of practice for McKinnie, who is learning a completely new offense, is concerning.  This is why we questioned the timing of the trade earlier this week.  I mean, the Dolphins obviously knew the offensive line was a problem BEFORE their embarrassing loss to the Bills.  Why not use the 2 weeks off during the bye week and make the trade at that point?  That way, McKinnie could have had 2 weeks to learn the offense and to adjust to his new teammates on the offensive line.

Like I said, it can’t get much worse than it was.  The Dolphins gave up a ton of sacks this season and Ryan Tannehill will not last the entire season if it continued at the pace they were on.  We can only hope that a change of scenery will make McKinnie try harder and that he will be willing to limit his weight.  Again, all we have at this point is hope.  On Sunday, we’ll see just how much hope there is in this move.

For the latest Dolphins news from PhinNation.com, be sure to bookmark our site in your browser