Source: Philbin was infuriated by some of Sherman’s playcalling

The soap opera that is the Miami Dolphins continues to play out before our very eyes.  Another day passes and we have no clear decisions being made or changes announced that will help the team improve in 2014.  According to the Dolphins beat reporters, Stephen Ross was not at Dolphins Headquarters today.  Joe Philbin, Kevin Coyle, Dawn Aponte, Jim Turner, and a host of Dolphins players were there.  One person that no one saw was Mike Sherman.  Now, he could’ve gotten in before the reporters arrived or he might not have needed to be at the facility today.  No one knows for sure. 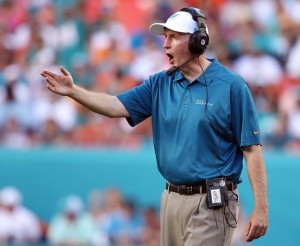 I would like to point that no one has any inclination as to what the Dolphins are going to do.  Everything you read will be speculation or calculated guesses.  The popular consensus is that Stephen Ross used yesterday as a fact finding mission.  He met with both Joe Philbin and Jeff Ireland.  What is also becoming more clear is that the Dolphins Owner thinks that Mike Sherman could be the scapegoat for the 2013 season.  Why?  Because his offense ranked 27th in the NFL….after finishing 27th in the NFL in 2012.

Armando Salguero of the Herald said yesterday that he believes Ross would like to fire Sherman….BUT, he doesn’t have the authority to do so.  That’s right, an NFL owner doesn’t have the power to fire someone on his coaching staff.  Why?  Because Joe Philbin has language in his contract that gives him final say on coaching staff hiring/firing matters.  Further complicating matters is the close, long term relationship that Joe Philbin has with Mike Sherman.  Sherman, according to what one source told the Miami Herald, is ‘running that team’.  Sherman was always Philbin’s mentor, leader…why would it be so surprising if he wasn’t calling the shot?  Wouldn’t all of that make it hard, if not impossible for Philbin to fire him?

Yes it would.  But you know what?  it gets worse!  According to Barry Jackson of the Miami Herald:

I had to google exasperated folks.   I admit it.  It means infuriated.  Philbin was openly infuriated by some of Mike Sherman’s play calls…..just like many of us!  So we weren’t crazy!  We aren’t football novices!!!   The fact that Philbin didn’t address this at Sherman so that he did like the play calls is a problem.  He’s the head coach.  If you don’t like the play call…change it.  Or make yourself the play caller.  Step up!  (continued on page 2, CLICK HERE)