Time for the Dolphins to move on and prioritize this offseason

The Miami Dolphins just had a very public and very poor showing in front of the rest of the National Football League.  The Dolphins were turned down by 7 men for their open General Manager position.  We don’t need to rehash all of what happened because we all lived through it.  It was sad, disappointing, and frustrating.  We’ve all witnessed what has transpired over the last 5 months.  The Dolphins mediocre play on the field had it’s ups and downs….The Dolphins public relations department had its hands full with the Incognito/Martin fiasco….The Dolphins fired their General Manager and hired a new one, while keeping their head coach in place. 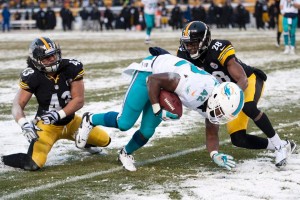 So now that we can start to look towards the 2014 season, we can start looking forward to free agency and the draft.  The Dolphins obviously need to upgrade the talent on the roster, so identifying the right targets in free agency and the draft are a must for Mr. Hickey.  The Dolphins have to remake 4/5’s of their offensive line….They need to find a starting quality running back that can get them a yard on 3rd and 1….They need to figure out what to do with their woefully underperforming linebacking corps…..They need to resign Brent Grimes and figure out if Paul Soliai or Randy Starks is the better fit at defensive tackle….All of those things are ‘must have’s as far as I’m concerned.

The sad part is that the Dolphins have a lot of needs (thanks to Jeff Ireland) and it will be difficult, if not impossible to cure all of their ills in one offseason.  The list above are essentials and doesn’t even include the ‘wants’ I have, like a taller wide receiver or drafting a QB in round 3 or later.  Dennis Hickey has quite a job on his hands.  Free agency starts on March 11th and the draft will take place May 8-10th.  So there isn’t much time for Hickey to assess the current personnel and identify who he wants to acquire. Hopefully Hickey can do a better job of signing free agents and drafting players than Jeff Ireland did.  That’s not asking too much, is it?  (continued on page 2, CLICK HERE)