Dolphins closing in on Knowshon Moreno? What about Blount?

By Cyrus (@Cyruslassus on Twitter)
The current market value for Denver’s Knowshon Moreno and New England’s LeGarrette Blount is at about $3 million per season, which to me says the Dolphins should double their pleasure. 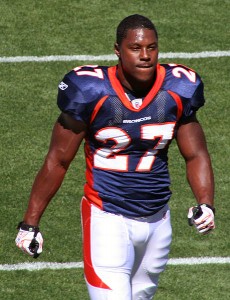 Knowshon Moreno is an every down back with good hands and an excellent pass protector.  He ran for a thousand yards last season and scored ten touchdowns and, at 26, has plenty of tread left on his tires.

His impact on the Miami Dolphins would be huge because the team currently has no answer to short yardage or goal line situations.  A former 1000 yard runner for Hickey’s Buccaneers, he averaged 5 yards a carry and added 7 touchdowns last season.

With the Dolphins not employing a protypical fullback, I could see LeGarrette Blount as the lead blocker for Knowshon Moreno and Lamar Miller at times.

In fact, Blount is so versatile that he average a Patriots record 29.1 yards on kickoff returns last season.

This trio of running backs would probably rush for 2000 yards next season, giving me flashbacks to the 1998 Miami Hurricanes.

Edgerrin James was getting a full workload, gaining 5.9 yards per carry for a total of 1416 yards, but what was most impressive about that team was that when he went to the bench, the team kept running and with even better results.

That team gained almost as many yards on the ground as it did over the air and a new golden era of Miami Hurricanes football was born.

Knowshon Moreno is not Edgerrin James, but the idea of an all around running back starting with a lightning and thunder tag team behind him is pretty powerful.

I am pretty sure offensive coordinator Bill Lazor could make it work.