Dolphins season on the brink after 2nd half meltdown versus Patriots

The Miami Dolphins last won a football game on September 22nd.  For you math wizards out there, that was 36 days ago.  After a great start on Sunday in Foxboro, the Dolphins faltered and found every possible way to blow a 2 touchdown lead at halftime.  The 27-17 loss to the Patriots dropped the Dolphins to 3-4 on the season after starting the season 3-0.  It also means that they are falling quickly in the wrong direction in the AFC standings. 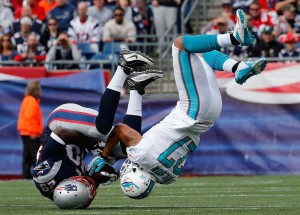 I was flying back from China on Sunday, so I missed the game and watched it on my DVR when I got home.  Funny, while I was walking through the airport, I had an odd thought “What if the Dolphins got out to a 14-0 lead on the Patriots?”  I’m not making this up.  With no knowledge of the game, I had that thought.  I then thought to myself that I wouldn’t feel comfortable, even with that type of an early lead.  Why?  Because: Dolphins.

As it turned out, the Dolphins played creative offensive football for the first 30 minutes.  They jumped out to a 17-3 lead at halftime.  They limited the Patriots time of possession by running the ball, using misdirection, and even rolling young Mr. Tannehill out.  All of the things we hoped for.  They also did a great job of protecting their young QB.  They did not allow a sack in the first half.  They looked like the 3-0 team that exceeded our expectations earlier this season.  And then, the third quarter came.

The Dolphins defense which had been so good, failed.  Their offense went away from the run and the Patriots turned up the heat and blitzed on seemingly every single play.  The Dolphins were outscored 24-0 in the 2nd half and turned the ball over 3 times.  Oh yeah, and the referees didn’t exactly help the Dolphins.  A few…let’s call them questionable calls…led to about 17 points for the Patriots.  But the main point here is that the Dolphins failed to execute and failed to adjust after halftime.  They built a 17-3 lead and then proceeded to shoot themselves in the foot…time and time again.  (continued on page 2, CLICK HERE)