The Miami Dolphins have saved their pennies and will probably make some cuts/restructures to save some more before Free Agency opens up next week.  Not surprisingly, the Dolphins are planning to attack the free agent market to find a starting left tackle.  The candidates that will likely be available include Eugene Monroe, Branden Albert, Anthony Collins, Bryant McKinnie, and Jared Veldheer.  I say likely available because there is still time for their current teams’ to resign them before free agency opens.  Although that’s not likely to happen with the Dolphins and McKinnie. 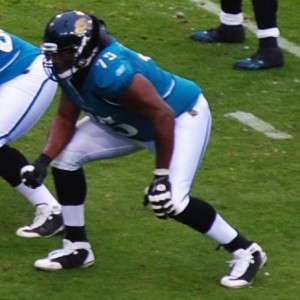 As Armando points out in his post today, the Dolphins are poised to get aggressive in finding new offensive linemen. Remember, the Dolphins only solid linemen is Mike Pouncey and he’s on thin ice after the disclosures of the Well’s report.  They need a left tackle, a left guard and upgrades on the right side of the line.  There’s a lot of work to do.

Mando also points out that the Dolphins appear most interested in Eugene Monroe, currently of the Baltimore Ravens.  The Ravens are working to resign Monroe, after trading for him in-season.  Mando says that Monroe, Albert, and Collins are all on the Dolphins radar, but Monroe is their top choice:

“If the three are available, it’s clear Monroe is Miami’s first choice. He has played 76 of a possible 79 games since 2009 so he’s durable. He’s also the best pass blocker of the group. But last season Monroe was only average as a run-blocker.”  (cont’d on page 2, CLICK HERE)