Dolphins WAKE up and pull out win over the Bengals

The Miami Dolphins took the first step in saving their 2013 season last night.  They also might have taken the first step in saving their head coach’s and general manager’s jobs.   The Dolphins never quit despite blowing a 14 point lead for the second week in a row.  Their defense, which was exhausted from a never-ending 3rd quarter, ultimately made the play that decided the game.  This was a team win…. a win this team can build on…… a win that came on a short week when the team was surrounded by negativity. 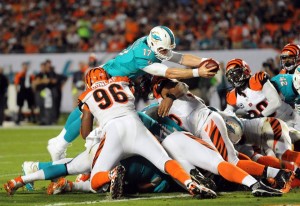 The Dolphins offense moved the ball effectively in the 1st half, running for 142 yards.  They built a 10-3 lead at the half.  Then, with the Bengals driving in the 3rd quarter, Brent Grimes stepped in front of an Andy Dalton pass and took it to the house, giving the Dolphins a 17-3 lead. The problem is that the Bengals drive consumed over 7 minutes of game clock and 14 plays.  After the Grimes TD, the Bengals got the ball right back and the Dolphins defense wilted, allowing a 12 play, 80 yard TD drive.

In the 4th quarter, the Dolphins defense missed tackles, as you would expect from an exhausted unit.  With under 2 minutes left, the Bengals moved into position and kicked the go-ahead field goal, making it 20-17.  The Dolphins offense took over with 1:24 left and Ryan Tannehill led them into field goal range on a 9 play, 50 yard drive which included a beautiful throw to Brian Hartline.  Caleb Sturgis, who had missed 5 of his previous 7 field goals, nailed the game tying field goal with 9 seconds left.

Then, in overtime, the teams exchanged possessions in a battle of field position.  Not to be overlooked are 2 key plays that ultimately decided the game.  First, Ryan Tannehill dialed up a deep ball to Mike Wallace and threw a perfect ball, but the defender tackled Wallace before.  To be fair to the defender, if he hadn’t tackled Wallace, it would’ve been a touchdown.  That play flipped the field in the Dolphins favor and ultimately lead to the 2nd big play.  Brandon Fields punted the ball inside of the Bengals 10 to the 8 yard line.  This set up Cameron Wake’s heroics, which ended the game on a safety.  Dolphins 22 Bengals 20, just like we drew it up, right?  (continued on page 2, CLICK HERE)