Ricky Williams has a lot in common with Jonathan Martin.  Both players went to high school in Southern California, have dealt with mental health issues and have been called weirdos by teammates.

Ricky is African American (Martin is bi-racial) and has also walked out on the Miami Dolphins, but even he is not completely comfortable siding with Martin. 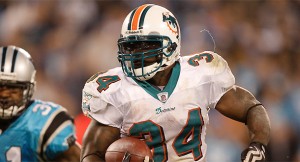 In an interview with KMGZ radio in San Francisco, Williams states “to me there is no room to play the victim or to be bullied or to even have that discussion when it comes to the NFL. If you’re having that discussion it just means that maybe you don’t belong in the NFL.”

Ricky Williams left the Dolphins in 2004 after failing a drug test and receiving a suspension, but distinguishes that he didn’t feel the need to “bring anyone else down” when he could no longer handle what he was going through.

Williams, who played with Incognito in 2010, said “if someone sent me those messages, I would send a text back and call him a redneck and put ‘lol.’ To me, situations that you got yourself into, you got yourself into. It falls on you to find a way to get yourself out. And I’m not judging the way he got himself out of the situation. I actually think it’s quite brilliant.”

This is one of Ricky’s most important points, because Richie Incognito left Jonathan Martin a hate-filled message after Jonathan did not report to organized team activities in April.  Anybody that follows the NFL knows that OTAs are not technically mandatory but everyone is expected to attend.  (continued on page 2, CLICK HERE)