Pitiful Picks: Can the Dolphins get back on track….in London?

The Miami Dolphins will look to get their season back on track today, when they take on the Raiders in London.  Unlike the Dolphins, our Pitiful Picks are red-hot!  We went 4-1 last week, with our only loss coming from….wait for it…..the Dolphins! 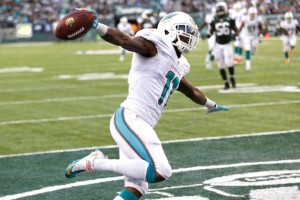 This week has some pretty interesting matchups and we’re going to stick with our theme from last week: Taking the team that NEEDS the win. So….here we go:

We’re going with the Colts again. They’re 1-2 and need to beat up on teams like the Titans.  After a surprising week 1 win over the Chiefs, the Titans haven’t looked good.  Meanwhile, the Colts are trying to get healthy and beat up on teams after a tough 0-2 start to their season.  Andrew Luck lit up the Jaguars last week on the road and I expect him to do similar things to the Titans. This won’t be pretty.  Prediction: Colts 34 Titans 17

This game stands out because the spread is less than a field goal. I think the Falcons are simply a better team than the Vikings and should win this game by 7-10 points.  Yes, the game is in Minnesota, but the Falcons offense is high powered and the Vikings will be starting Teddy Bridgewater, a rookie, at quarterback.  Prediction: Falcons 24 Vikings 14

There’s something wrong with Tom Brady and the Patriots.  Yes, they’re 2-1. But, they haven’t looked like their usual dominant selves.  Brady is also missing throws that he didn’t miss previously in his career.  The Patriots had to hold on to beat the Raiders by a touchdown last week and the Chiefs found a way to get healthy against the Dolphins.  I’ll take the 3.5 points and homefield advantage of Arrowhead.  Prediction: Chiefs 27 Patriots 24

I wish that I had some kind of genius reason why I’m picking the 49ers.  Everything tells me to pick the Eagles.  But there’s a reason the 9ers are 5.5 point favorites.  The Eagles are traveling across the country and the 9ers NEED this game.  They can’t fall to 1-3 in the NFC West or they’ll be in BIG trouble. Look for it to be a high scoring game with the 9ers defensive front putting pressure on Nick Foles due to the Eagles banged up offensive line.  Prediction: 49ers 31 Eagles 24

After watching the Dolphins play the last 2 weeks, I really struggled picking them.  Their passing game hasn’t been good, the head coach questioned the QB publicly, and the Raiders are better than people think.  BUT, I think this is a game the Dolphins know they need to win.  They can’t go 1-3 heading into the bye with a matchup with the Packers looming on the horizon. They can’t.  I think the running game keeps rolling and Ryan Tannehill responds to his coach’s ‘threat’.  Prediction:  Dolphins 34 Raiders 17