The game plan for this Sunday’s game is: Just win, baby, win!

Style points do not matter, just the fact that this is the toughest remaining obstacle between the Dolphins and their first playoff appearance in five years.  It would be a big step towards clinching a playoff berth and place the team on the verge of a 10 win season, the baseline number for elite teams, in my opinion. 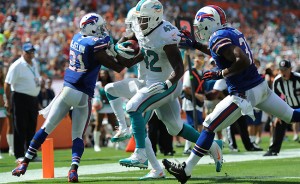 With the current hot streak, I am a firm believer that your Miami Dolphins are an elite team and a Super Bowl contender.  I have voiced an almost undying faith in the 2013 Dolphins that has made me sound like an irrational homer, but I never picked against the Dolphins all season and they only made me look like a fool once, against the New Orleans Saints, when they lost their first game of the season and got into a tail spin that was equal parts bad luck, bad performance and bad coaching.

Nobody is perfect, and we all make mistakes, in victory and in defeat.

Miami’s biggest strength is that they keep games close even when they do not play well and they always have a pulse.  This article almost seems pointless because they are playing so well that they should be able to head into Buffalo and win, without a game plan.

Regardless, here it goes:

Everybody knows that Buffalo’s strength is their running game.  CJ Spiller and Fred Jackson lead the fourth best rushing attack in the league, averaging 138.2 yards per game.

I’m not sure the Bills 6th rated pass defense gets the credit they deserve as they hold opponents to just 219.1 yards per game.  (continued on page 2, CLICK HERE)