The Miami Dolphins have begun their search for a new General Manager.  As soon as the position opened up, speculation reigned and I’m pretty sure about 5,683 candidates were rumored to be on the Dolphins radar.  That list of candidates is beginning to take shape, as we learned on Thursday, exactly what the Dolphins new GM will be responsible for. 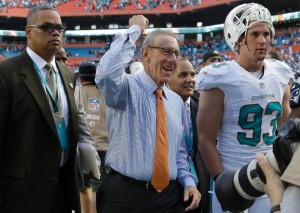 Stephen Ross indicated on Thursday that Carl Petterson, his close friend, will help advise Ross during the GM search.  He also confirmed that the new GM would have authority over the final 53 man roster and would report directly to Ross himself (not Coach Philbin or Dawn Aponte).   This GM will obviously need to work closely with Coach Philbin because their vision for a player that fits the scheme must match….unlike the last 2 seasons when there was a disconnect between Philbin and Ireland.

According to the Miami Herald, the Dolphins added a new name of interest to their GM search and it is an intriguing one;  Eric DeCosta, the Ravens assistant GM.  DeCosta is thought to be the heir to Ozzie Newsome’s job in Baltimore and has previously turned down opportunities to leave the organization.  He’s been loyal to the Ravens before, so it’s unclear if he would be interested.  I hope he is, because he would be at the top of my list!  Per the Herald, here is the full list of candidates that the Dolphins have confirmed interest in:

The @RavensInsider , a beat writer for the team said it’s unlikely DeCosta would leave due to his contract and the fact he wants to follow Ozzie Newsome as Ravens GM, so that one may be a long shot.  The Herald also confirmed that Omar Khan is in Miami today being interviewed.  The Dolphins will continue to interview candidates next week and I suspect they are looking to have things tied up within the next 2 weeks.  The key will be to make sure that the process isn’t rushed and that they ultimately land the best person for the job.  (continued on page 2, CLICK HERE)