It has happened again! The Miami Dolphins, going into the 2nd game of the season following a brilliant and glorious game against New England last week, managed to not just lose the game, but to get soundly outperformed at every level by the Buffalo Bills. Please tell me we’re not about to re-live 2013 all over again and that this game was just an accident, a compilation of all that could go wrong instead. 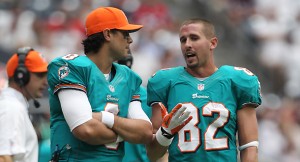 There were few positives coming out of this game and since the list of horrors is a lengthy one, I’ll list the good things first, believe me, there are not that many. It was reassuring to see rookie running back Damian Williams doing well, after Knowshon Moreno had to leave the game and Miller’s struggling performance. The second positive we could take from the game is… actually, there are no more positives we can take from the game.

This game could very well have been played last year, judging by the amount of sacks, drop balls and inaccurate passing attempts. It was as if as though destiny was playing a cruel trick on loyal and beleaguered fans… some of us even had visions of season flash in front of our eyes. Back to the same old tricks was Miami QB Ryan Tannehill,  missing his receivers by throwing behind them, and over/under-throwing them .  Running back Knowshon Moreno was lost for the next 4 to 8 weeks with a gruesome elbow hyperextension which looked worse on live TV than it turned out to be. The special teams also chose a bad day to have an awful game.

I know it will not be long before the voices on dissent among the fan base, start calling for Moore to step in and take over the quarterback’s role, but as much as I like Moore, I am not just there yet, but I have to admit, I came away from this game feeling very disappointed with Miami’s QB, and not necessarily because of the game itself, although the game did very little to minimize my discontent, but from the post-game presser, because of the way Tannehill  almost appeared to sound defensive and continuously threw others under the proverbial media bus when he was asked about his play. This I had never seen him do and is what caused the most disappointment from my perspective.

There’s one thing which I have already noticed as the one causing the most dislike among the fans. The fact that Joe Philbin opted to let the clock run out when the Dolphins got the ball back with over 2 minutes left in the first half, with the Dolphins down by 9, was wimpy in my opinion and it is already receiving a lot of attention. There’s lttle we can come away from this game with, which could be considered  remotely positive. This game brings back vivid memories from last season and the injury to Knowshon Moreno does not make the day any easier to forget.