Pitiful Picks: Can Tannehill Lead the Dolphins to an Upset Win? 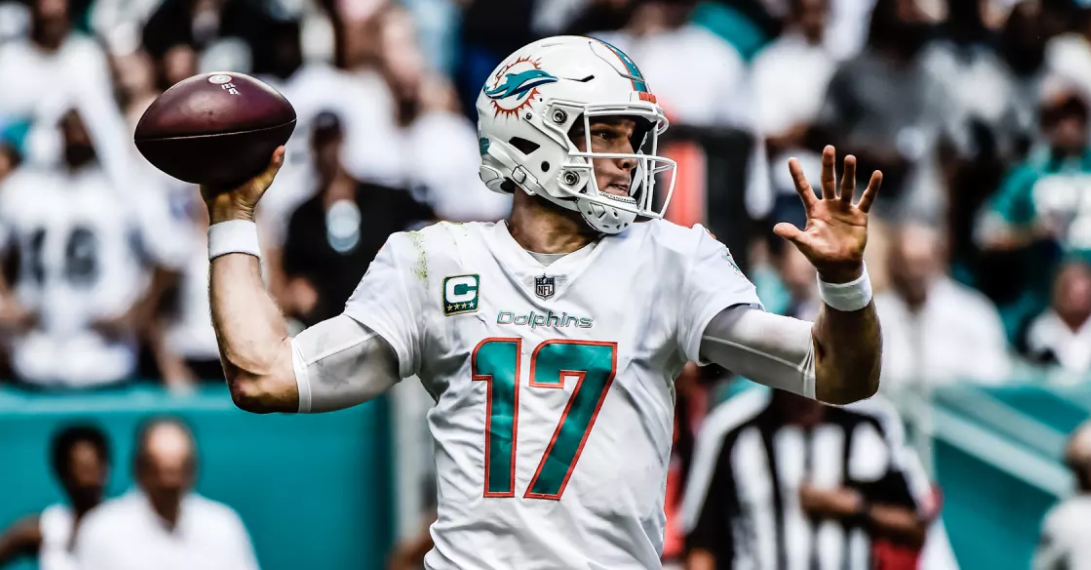 The Miami Dolphins will face their toughest test in 2018 on Sunday, when they head to Foxboro to take on the Patriots.  Unlike the Dolphins flawless 3-0 record, we fell to 9-3 on the year with our Pitiful Picks.  We’re looking to get back on track this week after a 2-2 Week 3.  By the way, the Dolphins are 3-0 against the spread and we are 3-0 in picking the Dolphins vs. the spread and overall winner of their games (them each time).

Week 3 saw it’s share of upsets and there are a number of good games ahead in Week 4.  Dolphins/Patriots, Eagles/Titans, Bucs/Bears (who’d of thunk it!), Bengals/Falcons, Ravens/Steelers, and Chiefs/Broncos.  Here are picks for week 4, feel free to leave your picks in the comment section below:

Yes, the Browns have to travel to the West Coast.  But the fact they have Baker Mayfield as their new starting QB, makes this an easy choice.  The Raiders haven’t played a complete game yet this season and seem to be in a downward spiral.  The Browns are coming off of their first win since 2016 and will have some confidence to go with their extra 3 days to rest & prepare for this game.  Give me the Browns and 2.5 points.  Browns 24 Raiders 21

I’ll be honest, I don’t love this game. But, I like the fact AJ Green will be healthy for this game against a very banged up Falcons secondary.  The Bengals lost to the Panthers last week, so I expect a rebound game from them.  The Falcons were involved in a shootout last week against the Saints and I would expect this game to be high scoring as well.   The Falcons may end up winning, but I think it’ll be close.  Falcons 33 Bengals 30

Ahh, the AFC West.  The games, like most divisional games, can end up being crazy and unexpected.  However, The Broncos have turnover-prone quarterback and the Chiefs have too many offensive weapons.  Any Case Keenum turnovers could turn into instant points of the Chiefs.  I think this line is too low, even though this game is being played on Monday night in Denver.  Chiefs 31 Broncos 24

If you look at history and want to believe it will repeat itself, you should be the Patriots -6.5.  The Patriots have won 9 straight games against the Dolphins in Foxboro, most of them being blowouts.  Last year, the Dolphins lost 35-17 in Foxboro…..but that was with Jay Cutler at quarterback for the Dolphins.  The last time Adam Gase and Ryan Tannehill went to Foxboro, it was much closer, with the Patriots winning 31-24.

I think this Dolphins team actually matches up well against the Patriots.  The Patriots defense has looked slow and the we’ve seen the explosiveness of the Dolphins offense so far this season.  I expect this game to be a shootout because I think the Dolphins will put up a lot of points, but I also think the Patriots will focus on running the ball out of 3-wide sets and forcing the ball to Gronk.  If Josh Gordon plays, he’ll be the best playmaker on the field for the Patriots, not named Gronk.  Hopefully Xavien Howard gets matched up on him and can keep him in check.

While I think this will be a shootout, I think it will be a close game in the end.  The Patriots have history on their side, as they haven’t lost 3 games in a row since 2002.  They’ve lost 2 straight and are not a happy group.  They’ll do everything they can to get their season back on track and the fact this game is at home, will be a huge advantage for them.  If this game were in Miami, I think the Dolphins would have a great chance of pulling out the win.  It’s possible they do that here, but I’m going to go with my head over my heart this week.  Trust me, I hope I’m wrong!   Patriots 34 Dolphins 31