Which Dolphins rookies will stand out in Preseason Game #1?

Twenty five rookies could debut in a Dolphins uniform against the Atlanta Falcons and it is a surprisingly deep group.  Roughly fifteen players out of this group could reasonably make the final 53 man roster or 8 man practice squad. 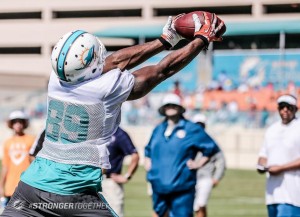 Here are the guys I am most excited to see tonight as I expect each one to make the final 53 man roster and earn playing time in 2014:

#14 Jarvis Landry, WR Louisiana State
The second round pick is the early favorite for Dolphins rookie of the year.  All reports are that he looks like a seasoned vet and very much in the battle for the starting slot receiver position.

#72 Ja’Wuan James, OT, Tennessee
The first round pick is your starting right tackle for better or worse, he has no real competition in camp.  He was drafted because he projects well as a blocker in the running and passing game.

#76 Anthony “The Freak” Johnson, DT, Lousiana State
This undrafted gem was graded as highly as a third round pick in this draft before his stock fell following a poor combine and a disputed failed drug test.  He has done an excellent job so far and I expect him to keep showcasing his quickness and explosion.

#57 Jordie Tripp, OLB, Montana
This fifth rounder projects as a standout special teamer and as a very versatile linebacker, he could be next in line if any starter struggles or gets injured.  He has experience as a long snapper.  If he could actually perform this duty at the NFL level, the team would gain an advantage on all other NFL franchises by not having to devote a roster spot to a snapping specialist.  (continued on page 2, CLICK HERE)